Virginia Wolff has been quoted as saying “for most of history, ‘anonymous’ was a woman.” I’ve thought about that quote a lot over the years and while it may have been true, it doesn’t mean it has to remain that way.

The theme for this year’s International Women’s Day is #ChooseToChallenge—choose to challenge gender bias and inequality and choose to seek out and celebrate women’s achievements. So that is what I intend to do. I choose to celebrate remarkable women in STEM roles and share their stories. Because when we share their stories, “anonymous” earns a name.

While the list of women to recognize is long, I’ll start with three. Three women whose contributions to their fields and to the advancement of women have inspired me. These are there stories and their thoughts for future generations.

A 1984 graduate of the U.S. Naval Academy (USNA), Christine Gromek was among some of the first women admitted to the service academy—the first women graduated in 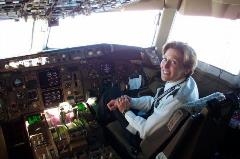 1980 and they represented just 2% of the student population. After a prestigious naval career, Christine went on to become a commercial pilot. As fewer than 5% of commercial pilots in the United States are women, Christine was once again challenging the status quo.

As a teenager, making a decision about where to continue her education, Christine didn’t really understand the impact her enrollment at the academy would have for future generations of women.

“I certainly did not think of myself as a trailblazer,” she said. “It was a means to a great engineering education. I was also accepted to Steven Institute of Technology with a scholarship but it was my dad who gave me the push to pursue the Naval Academy.”

As she left for the USNA her father told her to “always aim high as high as you can dream—because even if you fail, you will have attained more than if you didn’t dare to try.” Those words had a profound impact her as she started down a path that very few had walked before her.

She was one of only two women in her class to study systems engineering and she said that came with one great benefit. The other woman, Dr. Marjorie Rawhouser, went on to earn her master’s and PhD in biomedical engineering from Penn State and has been her best friend for the past 40 years.

In addition to a lifelong friendship that resulted from the experience, Christine said that the Navy’s state-of-the-art facilities allowed them to keep pace for the ever-advancing world of technology. She also noted that the world-renowned professors saw students not gender and were incredibly supporting and encouraging.

For young girls making their way in the world today, Christine offers her own words of encouragement: “DON’T let someone else define you. Don’t let anyone tell you, you can’t or are not capable of pursuing your dreams. It may sound awful but by anyone, I mean anyone … not a parent, friend, teacher, sibling, significant other. Find a mentor. Ask if someone will mentor you if she/he doesn’t offer. And then don’t quit.”

As a Principal Program Manager at Microsoft, Kathleen Dollard is largely responsible for the .NET Core CLI and SDK and managed languages (Visual Basic.NET and C#).

Modern .NET development is possible today in large part due to Kathleen’s contributions. What’s more, as an author and instructor as well, countless developers have read her books and articles or taken her courses and have improved their craft because of her teachings.

A veteran in the software space, Kathleen said her love affair with tech didn’t really start till after college. She said her eighth grade math teacher let her play with a castoff HP “desktop” to keep her out of trouble and she enjoyed it, however most computers at the time used punch cards. That was what they were using through college, and she hated it.

“There was very little room for mistakes,” she said. “I only really fell in love with computers with PCs that were forgiving of bad typing. A lot in my career since then has been to make it easier to avoid and manage mistakes.”

And if making mistakes is her nature, we should all take comfort in making many of them. Her career and contributions to modern software development languages and frameworks have changed the face of development and will positively impact the app dev space for many years to come.

But even with that, she said if she could go back and give her younger self one piece of advice, she said she’d say, “Relax as much as possible. Other people’s reactions are their problems.”

“I was an inherently thick-skinned, extroverted, privileged white girl that was willing to wear boring beige, swear and not complain too much in order to fit in,” she said. “I am passionate about that rough exterior not being a prerequisite to having an awesome career in tech.”

In looking at young women today, Kathleen said she’s “in total awe of the next generation of women demanding not just space in the room, but walking with their own style and their own voice.”

And while she is in awe of the next generation, she also feels we have a way to go from an inclusion and diversity perspective.

“The stats on this are pretty clear,” she said. “We are failing minorities and particularly minority women. I think part of our subconscious bias is to judge people that look like us or people we relate to primarily on their potential and other people primarily on their track record. We have to stop that. It takes effort to consider potential and accept risk for someone you don't have a template for imagining in a role.

“I like that we are working to feel inclusive and thinking of inclusive environments,” she continued. “But if that doesn't play out in better career trajectories, and longer careers in tech, we have failed. And while I do believe it is ethical to give everyone the same opportunity for an amazing career, the deeper reason is how much amazing talent we are failing to leverage. This is a loss we just can't afford.”

The Chief Engineer of NASA’s Game Changing Development Program, part of the Space Technology Mission Directorate, Amanda Cutright is the technical lead for the program which has oversight for many projects including the team responsible for the Mars 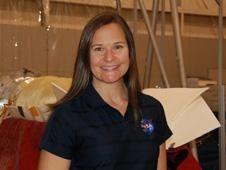 Entry, Descent and Landing Instrumentation used in the February 2021 Mars Perseverance landing. Prior to taking on the role of Chief Engineer, Amanda served as the Orion Flight Test Management Office Systems Engineering and Integration Team Deputy on the team that executed the Ascent Abort 2 flight test of the Orion Launch Abort System. Among other things, she’s currently part of the team supporting technology developments for landing on the Moon for Artemis missions and Commercial Lunar Payload Services (CLPS). Amanda’s contributions to NASA’s Space Technology Mission are innumerable.

Amanda’s journey in STEM started when she was young.

“I feel like my curiosity and hands-on learning started at a very early age with seeds planted by being influenced just being around my father as a NASA engineer, my mother as ‘an engineer at heart without a degree to prove it,’ and my older brother who always had patience to teach me about a variety of topics (and still does),” she said.

As an engineering student at Virginia Tech, Amanda was offered a volunteer opportunity with the NASA DEVELOP program. Her first mentor started “watering those seeds that had been planted” while also opening her eyes to the business side of engineering—the importance of understanding customers, importance of leadership—and the fact NASA has Earth Science too. She said he let her “fail with safety nets” in order to learn and adapt fast.

After earning her undergraduate degree, she was hired on full time at NASA to work under the Langley Engineering Directorate on a variety of flight systems while getting a master’s in engineering management and systems engineering in the evenings.

Throughout the last 20 years she has been able to serve on a variety of projects, many of which were flight projects with large teams and rigor in technical excellence: rockets, satellites, high altitude balloon payloads, aircraft, along with space systems and technologies.

During that time, Amanda noted that the biggest change for the better for female engineers is not only the quantity, but the roles they hold.

“We are seeing more women in the senior levels of active leadership roles within and external to the Agency whom have the credentials and experience as the justifications for the reason they are in the position they are in,” she said. “Fortunately, at NASA, I have always felt accepted, valued, and included in the teams overall and I feel that is not related to being a woman, but rather related to my personal approach to challenging situations, both technically and on the soft skills side.”

For her, Amanda said she sometimes struggles with differentiating between women and men as engineers.

“We are engineers first and foremost—which if you know an engineer you know is a special variety of human in and of itself,” she said. “For example, we have so many of great stories of women at NASA, some of which I have had the honor to work with, and because I work with proportionally so many more men, I often wish their amazing stories would be told more too. Such a wealth of knowledge and experience! I listen to their stories every chance I get and hope to retain some of their lessons learned in my day-to-day actions.”

And she notes that sometimes she’s taken aback that people still do see gender first and not the scientist. She’s doing her best in encouraging young women to not limit themselves.

“After delivering a keynote at a conference, a high school girl came up and genuinely asked me to advise her on if she should ‘pick engineering or to be a mom,” she said. “It blew her away when I said, ‘You can do both; you don’t have to choose one OR the other.’ I then pointed to my pregnant belly with my daughter inside as a second child. Yes—it has challenges, but many have done it in the past and will in the future.”

Christine Gromek, Kathleen Dollard and Amanda Cutright are proof that women can go from anonymous to synonymous with success. Their three stories are extraordinary for what they’ve achieved and who they’ve become. But there are countless women out there doing exciting work every day who most of us still don’t know.

So, now I challenge you to share the stories of women who have had a positive influence on you—in a blog, on social media, or even within your circle of friends. Celebrate their achievements.

Because when we tell their stories, we give them a name and we recognize that they are in fact making a difference by choosing to challenge the status quo.